A Clean Kill is an independent film now available on the Lifetime Network. 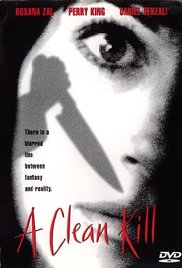 “A Clean Kill” was accepted for it’s world premiere as the opening night film at the Mill Valley Film Festival, the Telluride Indie Festival, and premiered on Lifetime Television as “Her Married Lover” in prime time during February sweeps. Buzz McClain  says  “A Clean Kill”  creates a seductive aura of delicious danger”.

Mike Mayo gives the film 3 bones out of 4, and calls the film an “Intriguing little mystery… some of the best work Benzali has done since Murder One.

Note this film has been retitled as “Her Married Lover”

Daniel Banzali remarked about Roxanne, ” Working with Roxanne was a solid and wonderful experience.  She give clear and precise direction.  It would be a pleasure to work with her again.”